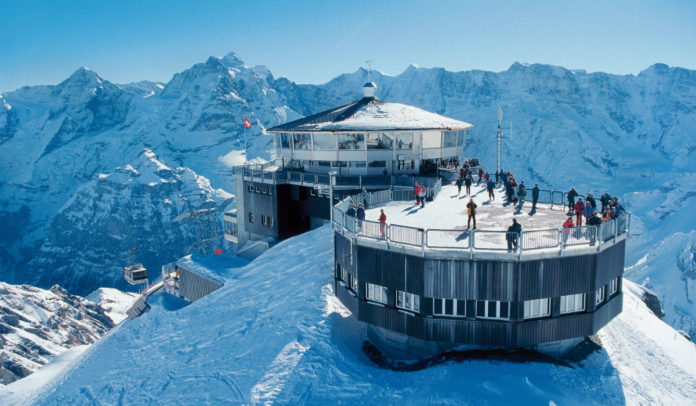 The Schilthorn is a summit in Europe, in the Bernese Alps of Switzerland. It overlooks the valley of Lauterbrunnen in the Bernese Oberland, and is the highest mountain in the range lying north of the Sefinenfurgge Pass. The Schilthorn lies above the village of Mürren, from where a cable car leads to its summit.

As well as being one of the tallest mountains in the Bernese Alps, Schilthorn became famous for a different reason when it was used as a key location in the 1969 James Bond film On Her Majesty’s Secret Service, starring George Lazenby and based on Ian Fleming’s 1963 novel of the same name.

The film’s arch-villain, Ernst Stavro Blofeld, bases his lair in the mountain, which is the setting for a significant portion of the film after Bond travels, undercover, to the lair to try and foil Blofeld’s plans. The name that Ian Fleming gave to Blofeld’s lair in his novel was Piz Gloria, which has been retained by the revolving restaurant that currently sits at the top of the mountain’s cable car station complex.

The mountain itself has long been popular with adventurous climbers keen to enjoy the fantastic views offered from its summit. To open up the views to others, it was decided in the late 19th century that a railway to the top of Schilthorn should be built.

Various projects for the mountain railway were designed and discussed over the coming years, but none came to fruition, largely due to Schilthorn’s terrain and shape making planning difficult. It wasn’t until the 1960s that cable car technology had progressed enough to be able to navigate the mountain, and in 1962 Schilthorn Cableway Ltd. was founded to undertake the task.

Construction of the railway began in 1963 and its first three sections opened: Stechelberg to Gimmelwald, Gimmelwald to Mürren, Mürren to Birg. In 1967, members of the public could finally make their way to Schilthorn’s summit via the completed cableway, before filming for On Her Majesty’s Secret Service began in 1968. The following year, the Piz Gloria revolving restaurant opened to the public, and it’s believed that the film team actually helped finance the completion of the restaurant.